Pursuant to sub-clause 4.4(4) of the Land Transport Rule: Traffic Control Devices 2004 and a delegation from the NZ Transport Agency, I, Glenn Bunting, Manager Network Safety, authorise the installation and maintenance of the traffic signs described in the Schedule to this notice.

Example: Give way to cyclists and pedestrians supplementary sign 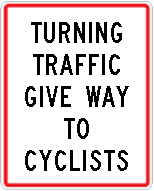 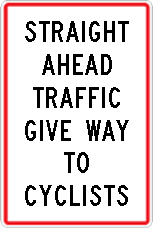 Example: Straight ahead traffic give way to cyclists sign 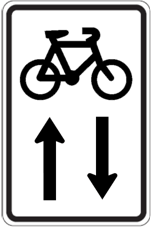 Note: The dimensions, descriptions and terms contained in this notice conform with the opening notes in Schedule 1, Land Transport Rule: Traffic Control Devices 2004.

Signed at Wellington this 6th day of November 2018.